I've been doing my best to work on mixed-media stuff a little each day, since I have some down time from school at the moment, and of course am not moving, nor am I shooting.

One new idea I had involved canvases and prints on fabric, and it went down in flames. (Almost literally, I thought for a minute about setting it on fire.) The final result wasn't bad, just not what I wanted: 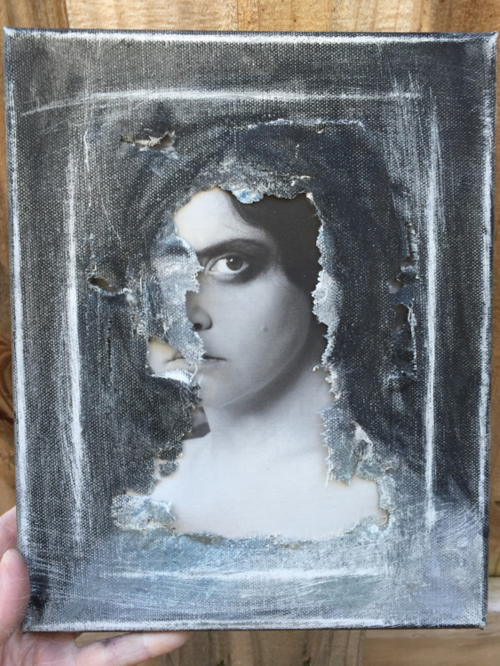 I had an extra fabric print of the same image that had come out a bit wonky because I forgot to change the print settings, and when I unearthed my craft bin I came across two old embroidery hoops, so I figured i'd try the same basic idea with that instead, and it went a million times better: 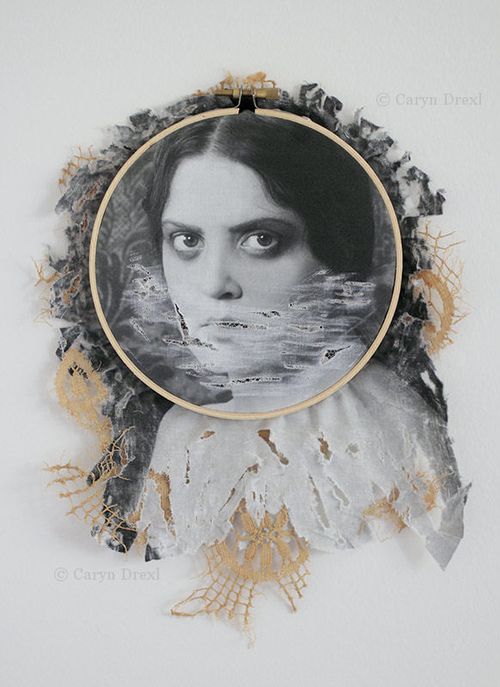 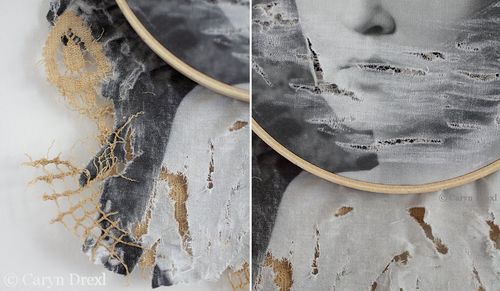 While technically this was a test piece, and still not exactly what I was shooting for, the plan now is to continue on in the same vein. I'm just waiting on bigger pieces of fabric to print on, as well as more hoops to arrive, and I need more bits and pieces of lace and fabric and the like to use, since I left that stuff in Florida. Like an idiot. (P.S. Donations are welcome!)  I also came across some chair pieces (the arched pieces that go on the back) at a local thrift/salvage place and am thinking about going back for them to do some non-hoop wall hangings.

I also finally started working on my second full body doll, Cada. I'm making about a million wings to go on her (maybe? my finger is already bruised and I've finished 4 or 5 in the span of...... many months. I refuse to count how many.) 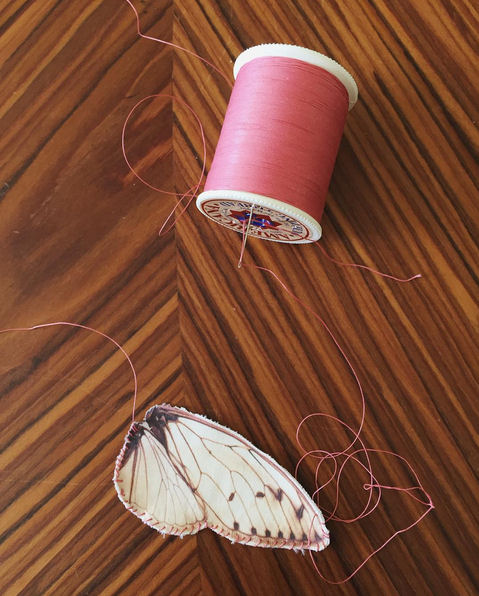 I have to admit that sometimes I feel more at home doing mixed-media stuff than I do photography. But, for as long as I can remember I've done crafty stuff, thanks to my Nana. There was a continuous wave of embroidery and rug hooking and weaving bracelets. That and game books were her go to when she wanted to busy us, but it was also something she enjoyed doing herself. I have her to thank for my odd button fixation. She had jars and jars full of vintage ones and I would spent a ridiculous amount of time as a kid just sifting through them and organizing them by color, only to toss them back in the jar. (I have my own jar now, despite still not sewing. But I'm definitely seeing a sewing machine in my future. Who is going to come over and teach me how to use it / not break it like every sewing machine I've touched in the past?)

So anyways, it's a comfort thing, I'm sure. And much more friendly to my crafting A.D.D. When I'm bored or frustrated with one I can just switch to another. The good news is that it's probably going to be crossing over into my photo work when I get started back up. It ties in to what I've talked about in the past, how I'm impatient and jump into doing simplified versions of my ideas, which I never really LOVE because they aren't what I really wanted. This is teaching me to take more time, and I think creating more props and the like by hand is something I can easily put into rotation with the mixed media pieces, making it that much easier to accomplish fully. And that way, by the time I can finally get back to shooting, I'll already have some major things done!

It's SO nice feeling productive again.

Posted by Caryn Drexl at 11:51:29 AM in Photography, Talky Posts